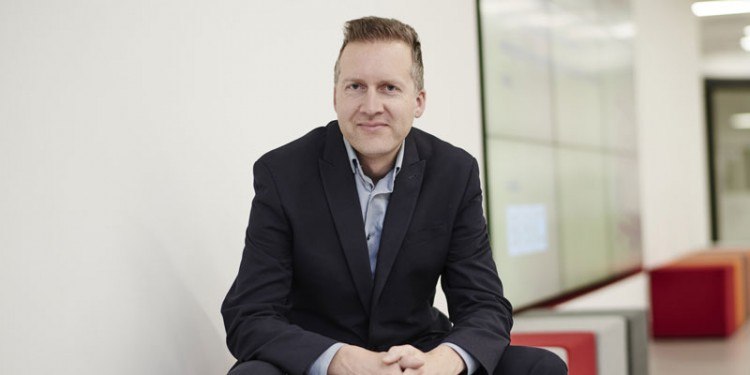 It has a new, user-friendly image, complete with cute dachshund. But can the Post Office also be a major bank with wide appeal? Chief Marketing Officer Pete Markey sees real opportunity, as Arthur Allan reports.
Doobie the dog has found love. The dachshund, who stars with comedy actor Robert Webb in the Post Office TV ads, found a match after a Valentine’s Day campaign that saw customers submit photos of their own pets for Doobie’s consideration.
“We have permission to be a bit playful with our customers,” says Pete Markey, describing the Post Office tone of voice.
Alongside the cute canines, however, Markey is leading some very serious changes – notably a drive to become the UK’s leading challenger bank.
Other retailers would kill for the penetration achieved by the Post Office. Every week, 17m people walk through the doors of a branch. Some 95% of us use it in any given year.

Making Its Mark
It’s a safe bet, though, that a large majority see it as a place to post a parcel or pick up a driving licence application. They wouldn’t think of taking out a savings account or a mortgage with the Post Office; they simply don’t see it as a bank.
As chief marketing officer, Markey must promote a 350-year-old national institution as a credible financial brand, without compromising its heritage.
“There’s a real opportunity for the Post Office to make a mark in the banking space, especially as there’s so little trust for core traditional banks,” he says.
Its unique strength, he believes, lies in the 11,500 branches that endure while many of the big banks are culling their own networks. Indeed, one of the peculiarities of this challenger is that it provides banking services on behalf of its bigger rivals as well as its own.

New Innovations
At present, Markey accepts, the customer base for own-brand Post Office banking is “a bit middle England”. Savings and investment customers are in the older age groups, though there is a younger market for Post Office insurance and mortgages.
“There are certain areas where the brand resonates very strongly: 35-plus, and a little bit more affluent, tends to be the sweet spot for us,” he says.
A new suite of products – now gathered under the ‘Post Office Money’ label – is designed to help broaden that base. An innovative cash ISA, for example, allows savers to put their money into a range of deposit accounts.
Financial advisers and mortgage specialists have been introduced in 300 branches. “That’s definitely a growth lever: you can’t beat meeting someone and discussing a mortgage,” says Markey.
But that’s just part of a wider transformation – one that Markey has been handed enviable scope and investment to deliver.
His customer experience team has developed a set of standards for the network to follow. “Any change that affects the customer comes through my team, which is great,” he says.
In his first year in post, the look and feel of 4,000 branches have already been transformed. One of the key differences has been the removal of the glass security screens that separated staff from customers.
Markey says this reflects a wider trend. “Some of the banks still have the glass there, but many have removed any counters at all and have staff at the front, helping people at self-service kiosks,” he says. “It’s been really well received by colleagues as well as customers.”
Other changes have been trialled in a university-based ‘test lab’, and are now being explored in the real world, through ‘concept branches’ at Kennington Park and Oxford.
“We’re using some clever kit to get a read on where we can improve flows,” Markey says. “We have some customers wired up to see their reactions to the service: when do they get stressed? Do they have trouble finding the self-service kiosk, or the foreign currency counter?”
All this is done with a commercial end in mind: “If the in-branch experience gets better, we know that has a direct correlation with people’s attitude to taking out financial products with us.”

Embracing Its Roots
But Markey is acutely aware that the more traditional functions of the Post Office can’t be neglected in the pursuit of banking status.
“It’s got to be an equal balance,” he says. “We can’t forget the core business of postage. It will always be at the heart of what the Post Office does.
“It has always been a destination point, where you bring important things that need to be done. People come with a to-do list; our role is to help them fulfil it as effortlessly as possible. If we can do that, they’ll be more disposed to considering taking out a mortgage.”
Adding muscle to digital services is another priority for Markey in the drive to enhance the relevance of the brand. Plans to offer the ability to order foreign currency online, or to email a proof of postage receipt, have a double advantage: they’ll allow the Post Office to gather valuable data on customers.
Markey has appointed an analytics head – James de Souza from data specialists Dunnhumby – in a bid to improve the way the Post Office tracks and uses customer information.
“I’m lo0king at how we can capture everyday interactions at a series of trigger points,” he says. “If you’re a small business that regularly posts parcels, for example, there’s clearly a value in giving us your details in return for better services and incentives.”
Markey’s tenure has seen the social media presence stepped up too. Besides campaigns of the doggie dating variety, there’s a separate Post Office news feed for more formal corporate announcements, plus YouTube guides on the best way to wrap a parcel.

The Personal Touch
The Post Office also devotes two people to customer service management on social media. In recent exchanges, they responded to gripes about delayed mail with gentle reminders that delivery is handled by Royal Mail, not the Post Office. A suggestion that whoever named Doobie the dog “must have been high” is politely ignored.
The recent announcement that several branches would open on Sundays was supported with a live campaign: “We had creatives making Vines in the moment,” Markey enthuses. “It was brilliant – you could see things coming in real time.”
But the engagement effort isn’t limited to quirky online campaigns. Last year’s launch of the modernisation programme was deliberately stripped back, with a simple ‘We’re changing’ message featured in press and posters as well as digital.
Then, at Christmas, the Post Office ran a major TV ad for the first time in five years, introducing Robert Webb and that dachshund. Markey felt it struck a good balance: “It felt really modern and of the moment, but also still like the Post Office. As a result we saw year-on-year growth in mail, which is a really hard business to grow.”
He is brimming with enthusiasm for the next ad, devoted to Post Office Money, which he promises will be “hugely shareable”: “Again, it’s a very modern, fresh take on the Post Office. We’re doing some stuff that’s never been done before.”
Markey says he is hoping for strong improvements in key metrics on customer loyalty. “People need to see us as more relevant as a brand for them,” he says. “And I want to see data analytics becoming much more centre-stage in the organisation than it is today.
“If these things come together at the end of the year, it will have been a good year for me and for the business.”
How love shaped a career
When he passed up his first big break, Pete Markey’s career seemed to be over before it had properly begun.
PR agency Cohn & Wolfe offered him a place on its graduate scheme. “I turned it down because my girlfriend was in Southampton, and I wanted to make that work,” he recalls.
“I took a job in the call centre at British Gas instead. Friends told me I was mad, that I’d thrown it all away.”
He clearly has no regrets: the relationship prospered, and he’s now married with two children. And in the event, he didn’t spend too long answering phones.
Markey was selected for an internal training job and then led a sales team. Within a year, he had taken a role reporting on campaign performance.
He then worked on a strategy project which recommended that British Gas branch out into telephony and roadside breakdown services. As a result, the company bought OneTel and the AA – and Markey spent periods working with both of them.
OneTel was clearly a favourite: “It was a kind of Australian backpacker company. It wasn’t corporate or stuffy. Head office left us alone. Every month you got a free head massage at your desk.”
He moved on to More Than as head of marketing, acquiring an MBA in the middle of his three-year stint.
“Then the mother ship of RSA came calling,” he recounts. He worked all over the globe for the insurance firm, delivering customer experience projects in Russia, Canada, Latin America and Scandinavia.
When the Post Office role came up, Markey considered his own experience of the network.
“Like many people, I viewed it as a staple of the high street, a great British brand,” he says. “I certainly saw its good intent and its social purpose. The question marks I had were, is there investment behind improving the customer experience? And, what’s in it for me?
“Finally I thought, what a fun challenge, to work in a 300-plus-year-old business that’s going through all these changes. In many ways, it’s re-energised me.”

The Future of Buy to Let