Sowing the Seeds of Love 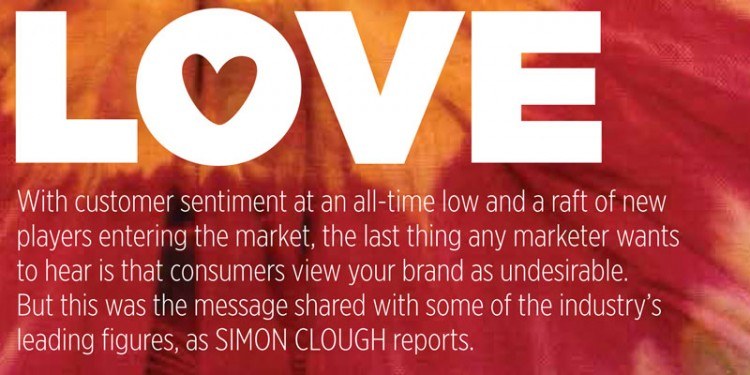 With customer sentiment at an all time low and a raft of new players entering the market, the last thing any marketer wants to hear is that consumers view your brand as undesirable. But this was the message shared with some of the industry’s leading figures, as SIMON CLOUGH reports.
At the beginning of 2012, Clear released the results of its second Brand Desire survey, exploring the brands that 22,000 people across the world most desire. The survey involved 555 brands across many industries, including financial brands such as Amex, Citi, HSBC, ING, MasterCard, Visa, Allianz, Bank of China and Standard Chartered.
Globally, financial brands ranked as some of the lowest when rated on statements such as ‘a brand I feel attracted to’ and ‘a brand that matters to me’. In the UK, the most desirable retail bank, First Direct, ranked at 188 out of 300 brands, four places below Aldi.
The data also confirmed what we intuitively know about banking brands: to consumers, they are virtually identical. Banks have converged towards one standardised personality, with few standing out from the crowd. Nearly all were seen as being highly ‘organised’, ‘serious’ and ‘sensible.’ No other industry in the study – not even the oil industry – suffers from such a profound lack of diversity.
Such unambiguous findings gave us a great opportunity to challenge the industry about its performance, so we gathered 18 senior FS marketers to share and debate the results.
Interestingly, there was little surprise at the findings. They were seen as a reflection of the conservatism within banks driven by the investor community; above all else, a bank must be credible and credit-worthy – especially in these times of crisis when we are all trying very hard to rebuild the reputation of the industry.
At the same time, we have seen a rapid influx of new players, taking advantage of developments in technology. Brands such as Metrobank, Mint, Zopa, Dwolla, Billmyparents, Smartypig and Square are changing the way we interact with our money and could pose a real threat to more traditional players. The early performance of these new financial brands speaks volumes:
•              Mint now has a community of over seven million members
•              more than £175m in loans have been arranged by Zopa
•              by June 2011, Dwolla was processing $1m worth of transactions every day.
There are also a number of established brands wielding marketing muscle and, more crucially, far more desirability, and are well-placed to take advantage of the changing dynamics sweeping the financial landscape. Consumers no longer find the idea of banking with high street retailers such as M&S, Tesco or John Lewis strange.

However, although our audience realised the gravity of this issue, there was a sense of disempowerment, as many felt that the conservative culture of FS institutions was a significant barrier to change. Making FS brands more desirable would require a big cultural change; and that would need to be driven from the very top.
How can FS brands create desire?
Our study revealed some interesting FS brands around the world which are bucking the trend and achieving results to match. These brands don’t just stand for being ‘trustworthy,’ a prerequisite in the financial space, they offer something more: a clear and inspiring purpose and a unique personality profile from their peers. USAA, Paypal and State Farm are three such brands.
So how do they do it? There are four simple rules:
•              Clarity of purpose: Have an inspiring purpose which goes beyond financial transactions and makes a real difference to people’s lives.
•              Inspire connections: Focus on winning people’s hearts, not just their wallets.
•              Focus on the future: Harness technology to help re-invent people’s money lives.
•              Create experiences: Use every touch point to reinforce your brand’s purpose and personality.
Our audience agreed that a brand which chooses to follow these principles could make a real difference to the market by connecting with customers as real people rather than numbers. This would mean identifying an inspiring purpose in people’s lives, plus a personality to match, then living it consistently across the whole customer experience.
The reality is the leading bank in ten years time may just as easily be Apple, M&S or Paypal as HSBC or Lloyds. The banking industry has a choice – change proactively now, or be forced to change with it later.

Driving Ahead With The Over 50s