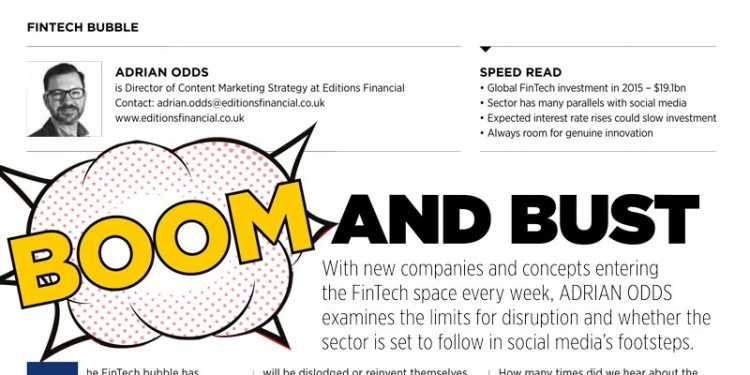 With new companies and concepts entering the FinTech space every week, Adrian Odds examines the limits for disruption and whether the sector is set to follow in social media’s footsteps.
The FinTech bubble has grown around an unusual set of circumstances:

Has this set of circumstances ever existed before? Probably not, but a similar set occurred in the social media space 10 years ago. Proliferation of suppliers coupled with an increase in
technological innovation ultimately resulted in Facebook and Twitter dominating. However, there was still space for newcomers such as Pinterest, Snapchat and WhatsApp. So, can this
model be applied to the future of FinTech?
ESTABLISHING THE CORE
There are currently a lot of large organisations and start-ups investing significant amounts of time and energy in trying to disrupt the financial services sector with blockchain and robo-advice being just two of the areas with seemingly limitless potential.
As with social media, the industry will atomise and innovate – incumbents will be dislodged or reinvent themselves, but ultimately financial services is likely to re-bundle around a core of suppliers who do the best job. And these suppliers aren’t necessarily new entrants – the brands that gain the most traction/trust and fulfil their brand promise will be best positioned to emerge victorious.
So by this measure the odds are actually stacked in the favour of traditional incumbents as they are already the owners of the customer relationship.
The new kids on the block have to work harder to get their message across in a saturated market and create trust with no track record.
LEADING THE WAY
Change is inevitable and constant. Sometimes technology and innovation are at the heart of disruption as new modes and methods of communication blur across industry boundaries. And sometimes revolution is led by customer expectation or the market developing in such a way that change becomes essential – for example, through market behaviour or new legislation.
Innovation always comes at a cost, though. KPMG’s ‘The Pulse of FinTech’ report published earlier this year stated that global investment in FinTech companies in 2015 totalled $19.1bn.
In such a saturated market, it’s likely much of this investment will never bear fruit.
How many times did we hear about the next big social media platform over the past decade only for it to fizzle out? For every Instagram there’s an iTunes Ping – a well-backed but short-lived platform by Apple that disappeared in 2012.
THE FUTURE OF FINTECH
With so much uncertainty around life post-Brexit, such as the future direction of interest rates, is the FinTech bubble reaching maximum inflation?
Well, not quite yet, but the market is moving as FinTech start-ups find it more difficult to raise external funding and the major players turn up the heat by bringing cutting edge services and products to market. As content marketers, we see an inflection point here in marketing priorities as the newer brands shift budget from lead generation and awareness building to deepening engagement and building long-term customer relationships for the future.
It’s certainly not all doom and gloom on either the newcomer or incumbent brand side – there’s always room for innovation that solves a genuine problem faced by consumers. As we’ve seen in the digital and social spaces, there will likely be a period of acquisitions as the savvy FinTech newcomers are snapped up by bigger brands – and if there are lessons from the
social media space, we’ve certainly not seen the final shape of this market yet.