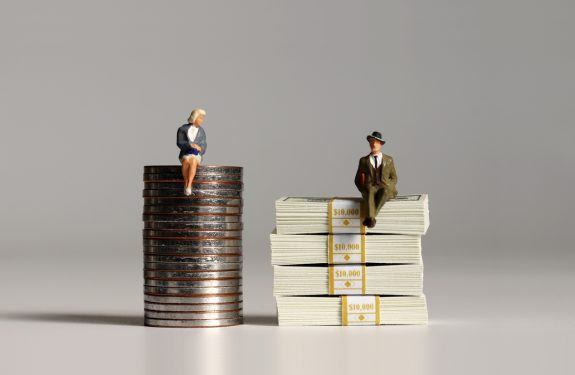 If you are a man reading this sitting next to a woman, it’s worth noting that, on average, your pension pot will be between three to five times higher than hers when you reach retirement.

While you may think you’re three to five times more deserving, the chances are this isn’t the case. You’ll also have more savings and more money in investments. If you’re a younger woman reading this, you might be thinking this doesn’t affect you, that times have changed. But times don’t just change, people need to change by having the structures in place to allow them to do so. In fact, the data suggests things are going the wrong way.

Based on Ipsos research among UK industry experts and citizens, this paper identifies how women’s lives often look different to men’s and unpicks the long-term impact of these differences on women’s financial lives, including the future toll of Covid-19.

To help bring to life some of the opportunities for financial services, this paper also explores some of the misconceptions about women and finances, such as a perceived lack of confidence when it comes to investment.

2. Women’s lives generally look different to men’s
According to the OCED, women do 75% of the world’s unpaid domestic and care work, head up the vast majority of single families (while being more likely to incur the cost of a high-interest loan), do the majority of the nation’s part-time work, take the most time off to look after children and are financially more affected by divorce than men. As a result, their financial lives typically look different to men’s, with a cumulative impact that manifests in a more visible discrepancy in later years.
The global pandemic has exacerbated this – women have not only reduced hours to look after children and sick relatives but, as the UN points out: “… are losing their livelihoods faster because they are more exposed to hard-hit economic sectors.”

3. Taking time out for care work has a dramatic long-term financial impact on women
When women have children, take maternity leave, or start caring for other family members they are very likely to experience a big dip in their pension contributions. If they return to work, they often do so with reduced hours, which means they contribute less to their pension while also being paid less (with prospects of promotion also being affected). Research before the pandemic by The People’s Pension showed that six out of ten mothers who return to work after children opt for part-time work, and women working part-time are on average paid a third less than full-timers.
The true ‘whole life’ cost of childcare is rarely calculated and where third-party childcare costs are incurred, they are often assumed to be met from the woman’s salary. As Laura, one of our research participants said:
“It didn’t make sense for me financially to go back to work full-time when I calculated the cost of childcare. It didn’t seem worth it. I guess we didn’t think long-term.”
Women who take time off work are not automatically compensated for the loss of earning this career break creates, or for the impact on their future earnings. And, while women may have joint bank accounts and co-ownership of a house, they are much less likely to have joint accrual of pension wealth. Full pension benefits are accrued by the partner who carries on working and trying to make arrangements that address this shortfall can be extremely difficult, due to the inflexibility of pension products and the cultural expectations they reflect.
The Covid-19 pandemic and subsequent school closures has resulted in more women than men reducing their working hours to look after children. As the CEO of Fawcett, Sam Smethers told us, it is likely we are “turning back the clock on gender issues 20 years”.

4. Divorce has an enormous and often detrimental impact on women’s finances
Unsurprisingly, this situation means divorce also disproportionately impacts women’s finances. As Sian Fisher, the CEO of the Chartered Institute of Insurers, says: “The average woman’s pension pot following divorce is zero.”
During a divorce, women are often faced with an immediate housing situation and don’t manage to negotiate a fair portion of their partner’s pension pot. As noted in Insuring women’s futures: “Despite marriage rights, only 29% divorcing couples discuss pensions, only 14% with pensions actually share them”. Research by Scottish Widows shows people have more expectations around sharing pets than pensions in the event of a divorce.
As divorce enquiries soar during the pandemic (the BBC reports top law firm Stewarts has seen a 122% increase in enquiries between July and October, compared with the same time period in the previous year from research conducted by LegalTemplates) this poses a future timebomb of compounded inequality and more older women being thrown into poverty.

5. There is a big discrepancy between the genders in terms of pension provision, as well as a lack of clarity.
During their later years, women are in a much less financially robust position than men. By the time a woman is 65 to 69, her average pension wealth is £35,700 – roughly a fifth of that of a man her age – according to a 2018 study by the Chartered Institute of Insurance (CII). As Sian Fisher explains, this is due to an accumulation of things throughout the course of a woman’s life:
“… it’s always about how much money you get in the first place, how consistent it is and how you can accumulate it.”
Childcare often means a break in or an end to pensions contributions. The impact of the pandemic has also meant more women have stopped contributing to their pension pots than men. As one of our participants told us:
“I’m freelance and don’t have so much work so have cut my pension. I can’t think long term right now.”
And often, in addition to not contributing to their own pension, if they have a partner, women are not always clear about their partner’s pension activity. Baroness Altman, Life Peer and UK pensions expert, has highlighted the common assumptions made, such as thinking your partner has named you as a recipient, don’t always come to pass.

6. Are women just less confident than men? Or are current financial products not fit for women’s lives?
Contrary to popular assumption, traditionally women have been big investors. Janette Rutterford, Emeritus Professor of Finance and Financial History at the Open University has highlighted that the 1950s American housewife was an incredibly significant class of investor. The difference is that historically women have gone for lower-risk products such as annuities or government-issued lottery bonds.
Rutterford gives an example of first world war war bonds. These were issued when the Government desperately needed money for the war and were carefully designed to be flexible, while also providing a regular return. This, Rutterford points out, was more fitting with women’s lives than some other financial products (due to other pressures on their lives, women tended to not want their money locked away).
Making sure products meet a need is crucial here. However, there is a culturally accepted assumption that it is the women who lack confidence in comparison to men around investing, rather than perhaps the products on offer not being quite right for them (or not being effectively marketed to them).
But perhaps, as Rutterford points out, everyone lacks confidence, it is just women who are more likely to admit they don’t know something:
… “if you strip out education and wealth difference and so on, you find women are prepared to take as much risk as men, more in some cases. So, it’s not that women per se are less confident, it’s just women are more prepared to say they don’t know about something… and men tend to display more confidence.”
Similarly, women are also more likely to be willing to learn about the wider impact of their investments, e.g. through sustainable and/or ethical investments.
This difference is also echoed by Warwick Business School who cite that women are found to outperform men at investing by 1.8 per cent but tend to avoid speculative stocks and focus on shares with a proven track record.

In summary
So, if the issue isn’t that women need to invest in a way that mirrors men, perhaps a more fundamental shift is needed? Perhaps it’s time to shift the onus of change towards acknowledging that women’s lives often look very different to men’s. Research into real-life challenges, situations and needs can help feed into the design of products, services and marketing strategies services that accommodate real lives.
Based on what we’ve covered above, we consider there are two broad opportunities here:

• Design products with women in mind (while still applicable and appealing to a broader market) making sure they are effectively marketed to help fill the gap.
Speaking the same language and connecting with consumers is important. As Rutterford points out, women are more likely to take more risks if advised by a female independent financial adviser (IFA). Moreover, it isn’t just about developing better communications: there are whole domains of investing that attract female investment over male. As Emilie Bellet, founder and CEO of Vestpod, writes, female investors are more interested in putting their money back into the community and in impact and sustainability.
We also know from Ipsos Financial Research Survey data that men are more likely to engage on Twitter and LinkedIn and women on Instagram and Facebook. The platforms favoured by women are underutilised for financial services communications.

• Design products for couples that help them work collaboratively to ‘even things out’ to reflect an equal partnership.
One example of this would be greater support, clarity and future planning around pensions, alongside facilities to help partners share their pensions more easily. For example, pensions designed with true joint ownership, regardless of where the contributions come from.
There is genuine white space for financial products and services tailored for women, or for couples who want a more balanced collaborative approach to their finances. Plus, if effectively marketed, they would appeal to a wider audience than just women.

Sixty Second Strategies: What skills does the marketer of 2021 need?

Forum Talks: On Neuroscience and Marketing with Dr Helena Boschi