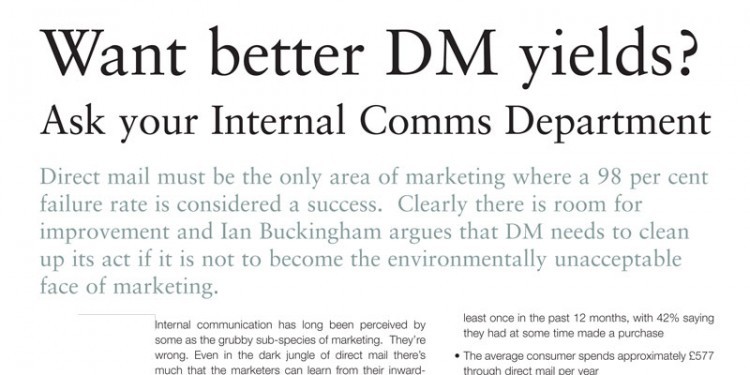 Direct mail must be the only area of marketing where a 98 per cent failure rate is considered a success. Clearly there is room for improvement and Ian Buckingham argues that DM needs to clean up its act if it is not to become the environmentally unacceptable face of marketing.
Internal communication has long been perceived by some as the grubby sub-species of marketing. They’re wrong. Even in the dark jungle of direct mail there’s much that the marketers can learn from their inwardfacing colleagues.
I love direct mail, but only now the cold weather is here and I often need to light a fire. It’s prolific, portable and the expensive paper burns well. So thanks must go to some well known financial services brands which seem to have very thick skins and admirable stamina and persistence.
They have coveted me from afar to the tune of several thousand pounds down the years, but I am afraid we’re just never meant to be. I guess I’m not alone in preferring the less is more, attentive charm offensive to the bludgeoning stalker. So why do they keep coming back for more?
Statistics will have us believe that this ‘throw enough mud at the wall of indifference and eventually some of it will stick’ approach to DM is escalating because, frankly, it works. I have my doubts, but let’s look at some recent stats from the Direct Mail Information Service
(www.dmis.co.uk):
• For every £1 spent £14 is generated
• The overall volume of direct mail has increased by 87% in the last 10 years
• 5134 million items were mailed in 2005
• 67% of consumer direct mail is opened, 45% is opened and read
• 32% of consumers had responded to direct mail at least once in the past 12 months, with 42% saying they had at some time made a purchase
• The average consumer spends approximately £577 through direct mail per year
• Of the £27 billion spent, just over 50% – or £13.6 billion is spent on clothes, while books account for £2 billion, electrical goods £2.4 billion with £1.4 billion spent on household items
To read the full article, please download the PDF above.

In Search of Excellence in CEO Succession

Sixty Seconds on the Future of Direct Mail