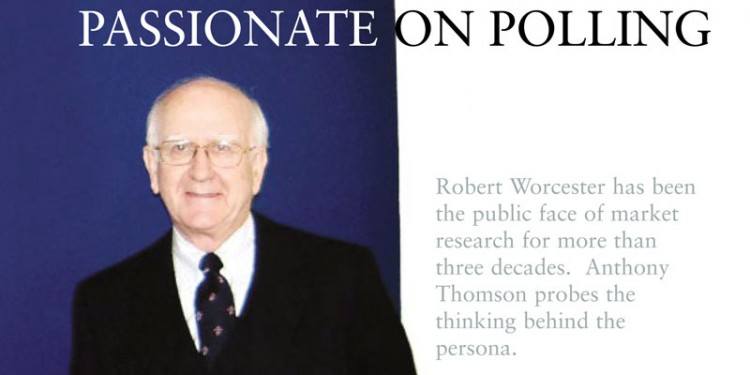 Robert Worcester has been the public face of market research for more than three decades. Anthony Thomson probes the thinking behind the persona.
It has always seemed to me difficult to tell whether public opinion is erratic, unstable and subject to swings of mood, or reflects more fundamental and slowly-moving changes. Edmund Burke likened British opinion to a herd of cattle calmly and silently grazing whilst the field rings to the chink of crickets. Are you measuring the noise of the crickets, or the voice of the silent inhabitants?
Let me deal with Edmund Burke first. You can find anything you want in Burke. I was amused to find that he is most often quoted as saying that the role of an elected representative is to lead, not follow public opinion, and that he owes it to his constituents to use his best judgment. Every parliamentarian has that engraved if not on his heart then on his brain. But what they forget is that his constituents in Bristol deselected him in 1780 for someone more compliant with his vote and who would listen to their views. That shows the dangers of quoting selectively!
The more substantive issue is that public opinion, although expressed sometimes as a definitive percentage, is an amalgam of people’s opinions, attitudes and values, and on most subjects you have a mixture of the three. People’s opinions are the ripples on the surface of the public consciousness, easily blown about by the media or politicians. They are not things that people have thought about or care about; nor that they have discussed with their friends or families; nor which affect themselves and their family. Until an interviewer puts the question to them, they have not really thought them through. And these things do flop about, and they’re the noise of the crickets.
Deeper are people’s attitudes. Things people have thought about, have concerned themselves with, and which affect their family for the most part – and which they do have a definitive view about. But that view can be changed by information that is new to them on the subject, from sources that they respect. That is where market research, opinion polling, whatever you wish to call it, has a role.
Deepest of all are people’s core values – their belief in God, the death penalty, euthanasia, abortion. Animal welfare is core for 25% of the British public, which explains a lot about not only fox-hunting but also veal and animal experimentation. These are things that are learned as children from parents, religious leaders, teachers and other influencers; debated in our teenage years and as young adults; and really pretty well determined by the age of twenty-five. Very few people change their core values on these things after this age.
So it is correct to think about public opinion as a snapshot at a point of time, but underlying that snapshot – depending on whether you’re researching their core values, their attitudes or their opinions – you have either a very stable base or an ephemeral thing that can be whip-sawed – the crickets in the metaphor that Burke puts so well.
To read the full article, please download the PDF above.

Paying for Training that Pays

The Problem with Consultants...