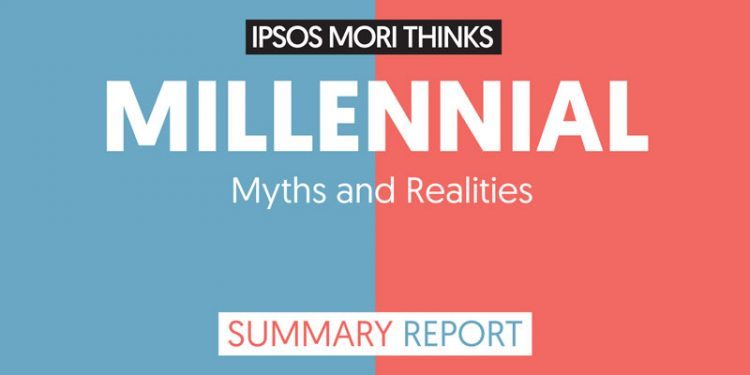 One of the questions we have been asked most often over the last few years by clients, journalists and commentators is “What do you have on Millennials’ attitudes and behaviours?” In response, we have completed a major review of all the claims and evidence around Millennials that we could find.
What this shows is that many of these claims provide compelling headlines, but are misinterpretations or just plain wrong. The term ‘Millennials’ has unfortunately started to become just another meaningless buzzword. But its original use is far from empty. ‘Millennials’ is the working title for the c. 15-year birth cohort born around 1980-1995, which genuinely has unique, defining traits, often lost in the litter of false claims and accusations.
Our review is designed to be as comprehensive and balanced as possible, to act as a resource and spark ideas on how government and business need to respond to this increasingly powerful cohort.
This summary picks out just some of the top myths, realities and part-truths from the full review.
Understanding change – three effects …
The fundamental aim of our review is to separate the three types of effect that explain shifts in attitudes or behaviours over time – cohort, period and life cycle effects. Each is important, and they often act together, but understanding which is dominant is crucial to understand why claims about Millennials are real, myths or part-truths. The most misleading research often muddles effects – concluding that differences that are purely because Millennials are (relatively) young will continue to define them as a generation as they grow older.
Generational analysis can unpick this: it may look retrospective, but in fact it is our best way to understand likely futures.
Our guide to spotting the three effects is below:
• Cohort effects: attitudes, values or behaviours are different among a generational group because of when they are born and when they grew up. These will stay with them as they age. Charts where the space between different generational lines remains broadly the same, suggest a sustained, generational difference.
• Period effects: the whole population can shift in similar ways, either because of particular events or circumstances, like wars or economic crises, or general cultural shifts, such as where all groups’ views of women’s roles have shifted to at least some extent. Example two opposite shows what an archetypal period effect might look like – all generations move in the same direction at broadly the same speed.
• Life cycle effects: some of our views are driven by our life stage and will shift as we get older and live through major life events, like moving into work, having children or retiring. In example three opposite, the mindset of the generations begins to change as they hit their 30s.
Two Millennial Mega-trends
Looking across the full range of our analysis, two core causal factors shine through as fundamental to the shape of the Millennial generation – the very particular economic and technological context they have grown up in.
First, the economic context. Millennials in much of the Western world have moved to adulthood at a time of stagnation, uncertainty and structural shifts of wealth from young to old, and growth from West to East. The financial strain and employment struggle has created a blockage in the millennial life cycle for many – an adult purgatory – where key choices associated with moving onto the next phase of adulthood are made later than previous generations. This change in the fundamental economic context has sent ripples through many aspects of Millennials’ lives, with symptoms noticeable across various characteristics: they are later to leave home, later to marry, later to have children, they are spending longer in education, smoking for longer and have a more fluid relationship with brands that reflect this less settled lifestyle.
But this is a Western trend. In emerging markets, the opposite is occurring – Millennials will be defined by a shift to greater prosperity and opportunity.
Second, the pace of technological change has increased so rapidly over the past 30 years that the tools and connectivity commonplace for a Millennial are significantly more advanced than the gadgets used by Generation X at a similar age. Technology is now such an important part of everyday life that it has shaped a truly different generation. But this doesn’t mean that there is a technological ‘shelf’ between Millennials and other generations.
The reality is that generational interaction and comfort with technology is a gradual shift. A cluster analysis of our Tech Tracker data from 2016 shows that the proportion of Millennials belonging to the most tech savvy cluster1 in each single-year grouping declines gently from young to old – there is no break that distinguishes ‘digital natives’ from the rest.
But technology is still massively important and a crucial part of what makes Millennials different: their average position is still very distinct from older generations on some key elements of behaviour, and this is something they will take with them as they as age, as we will see.
To continue reading the summary report from Ipsos MORI, please download the PDF document.