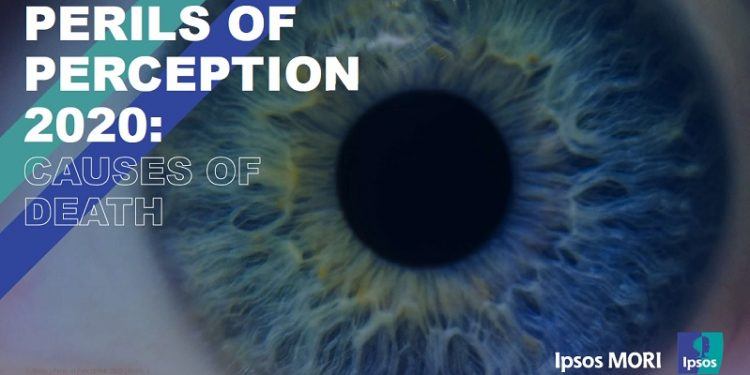 Ipsos’ latest Perils of Perception study highlights public[1] misperceptions across 32 countries about the proportion of people who die from diseases, violence, transport injuries and other causes. While patterns differ in different countries, overall on average people tend to underestimate how many deaths are caused by cancers and cardiovascular disease, and overestimate how many are caused by transport injuries, substance misuse and violence.
Causes of death around the world: Diseases and infections

Causes of death around the world: Conflict, terrorism and violence

Causes of death around the world: Substance use disorders

Causes of death around the world: Suicide

Causes of death around the world: Tranport injuries

How accurate is the British public…?

Compared to other countries, Brits are less accurate than most – in fact we are the 10h least accurate country in our “Misperceptions Index” – similar to Australia and Italy.
Looking across eleven questions where we get people to estimate factual realities, there are clear patterns in which countries have a more accurate view of their countries.  To capture this, we’ve calculated the Ipsos “Misperceptions Index”, as shown in the table below.
For 2020, Turkey receive the unwelcome prize of ‘least accurate’ in their perceptions after coming 3rd in 2018. They are closely followed by Romania and Spain.
Brazilians are the most accurate, followed by South Korea and the Netherlands.
Misperceptions Index

As part of the study, participants were also asked questions about things that could influence their guesses including what they saw most in the news, what they felt had least control over and what they thought would be the most unpleasant way to die.

You can view the report in PDF format by clicking the download button (top right).  Or visit the Ipsos MORI’s dedicated website on the report via www.perils.ipsos.com
[1] Interviews carried out online with adults aged under 65.  In countries with a low level of internet penetration, the sample will reflect a more urban, educated, and higher income profile than the general population

If you can’t be clear, you’re not trying hard enough

Towards True Competition: Making the Customers’ Case for Frictionless Competition in GI

The Rise of the Robo-Insurer

Losing Out to Aggregators in Online Search