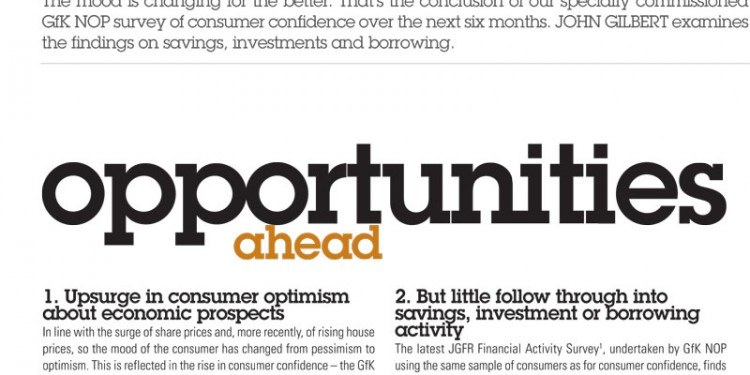 The mood is changing for the better. That’s the conclusion of our specially commissioned GfK NOP survey of consumer confidence over the next six months. John Gilbert examines the findings on savings, investments and borrowing.
1. Upsurge in consumer optimism about economic prospects
In line with the surge of share prices and, more recently, of rising house prices, so the mood of the consumer has changed from pessimism to optimism. This is reflected in the rise in consumer confidence – the GfK NOP survey for The European Commission stands at -16 in September, its highest since January 2008 and up from -32 a year ago in the midst of the banking crisis and at the start of the recession.
Consumers optimism about the economic situation in the coming 12 months is behind this improvement. It is at its highest since 1998. The latest survey found 44% of consumers expecting the economy to
get better and 27%who expected it to get worse in the next 12 months, compared to just 14% (get better) and 62% (get worse) a year ago.
This optimism is reflected in a big improvement in the JGFR measure of financial wellbeing, sourced from the GfK consumer confidence survey data. The UK Financial Wellbeing Index captures the position of household finances and spending confidence. In the past year, financial wellbeing literally ‘fell off the cliff‘ but in the past month has rebounded sharply.
Please download the full article via the button above.

Morals in our Memories of Millennial Mania