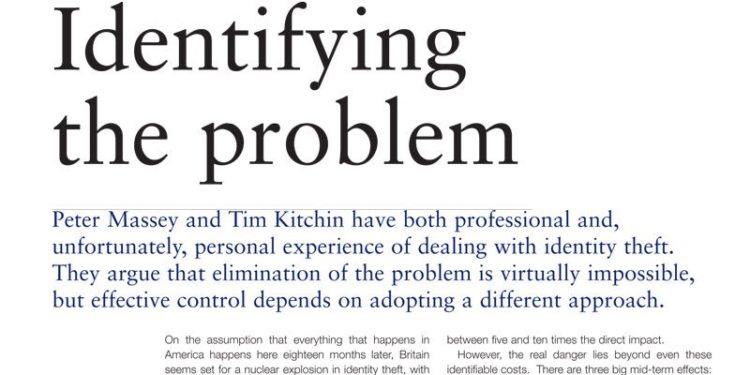 Peter Massey and Tim Kitchin have both professional and, unfortunately, personal experience of dealing with identity theft. They argue that elimination of the problem is virtually impossible, but effective control depends on adopting a different approach.
On the assumption that everything that happens in America happens here eighteen months later, Britain seems set for a nuclear explosion in identity theft, with the potential for lingering contamination in the economic system. Eradicating this is probably impossible at this stage, but control is a realistic aspiration, provided that identity handlers can sympathize, empathize, and operationalize to address the growing identity anxiety. Managing identity theft is as much about embracing consumer psychology as it is about preventing the crime. To achieve this, financial services organizations should act more humanely at the customer interface; provide service solutions that recognize the psychological trauma involved; and move beyond mere technology adoption to operationalize identity theft prevention and response processes consistently and reassuringly across all channels. They must systematically remove their customers’ grounds for mistrust.
In Britain, of course, criminals are playing catch-up with America. There, identity fraud has been estimated at $50 billion by Benchmark Group (see box), whereas the British government puts the problem at “just” £1.3 billion over here in the same period. But it is the knock-on effects on customer confidence that are ringing alarm bells.
Hidden costs
The direct cost impacts are just the tip of the iceberg. Second-order effects include reduced service use by affected customers; increased incident-handling costs; increased internal compliance activity and cost2; significant technology investment; and some business process re-engineering. We estimate these effects at between five and ten times the direct impact.
To read the full article, please download the PDF above.

Putting E-Business into the Business

Voice Technology: Past, Present and Future