All Change at Number 10 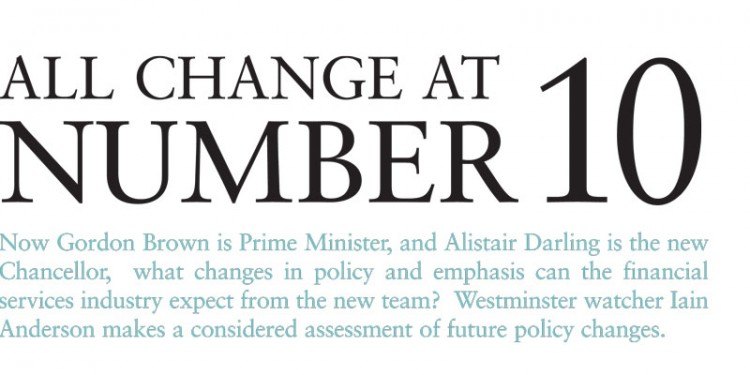 Now Gordon Brown is Prime Minister, and Alistair Darling is the new Chancellor, what changes in policy and emphasis can the financial services industry expect from the new team? Westminster watcher Iain Anderson makes a considered assessment of future policy changes.
It seems like a very long time we have been waiting for Gordo. But the arrival of the new Prime Minister and his Cabinet is already proving interesting for Westminster watchers like me.
There is certainly a new tone to government and – inevitably – a quicker pace towards proceedings. In the dying days of any administration, both the political class and Whitehall apparatchiks tend to start to go into purdah and prepare for a new administration.
Of course this time round, without a General Election or even a contested election for the leadership of the Labour Party, the Whitehall and Westminster community has been able to plan ahead for the new Premier and his team.
The series of announcements on Brown’s Cabinet brought some expected changes, notably Alistair Darling’s appointment as Chancellor. And at the Treasury there will clearly be a very different tone – a department now with a close relationship with Number 10, but having little in terms of autonomy.
Alistair Darling, recently said: “You may get a lot of stick for being dull and boring, but stick to it, make the changes that people want, let the improvements speak for themselves.” This wise and workmanlike approach will serve him well at the Treasury. It’s unlikely there will be much room there for flashes of inspiration anyway, given the tight spending limits he has inherited from Brown.
Further Treasury appointments include Angela Eagle – the combative former member of the Treasury Select Committee as Exchequer Secretary, and Kitty Ussher, a Blairite who has rapidly received preferment under Brown, as the new Economic Secretary with responsibility for financial services. Ussher, for me, is one to watch as she bears a striking political resemblance to her predecessor in the role from 2001 to 2004 Ruth Kelly – and she ended up in the Cabinet.
For the full article download the above PDF.