Invesco CMO: Asset management needs “brands with a bit of guts and soul”

Invesco plans to continue to prioritise distinguishing its brand this year as it considers how to follow up on its recent ‘Times Change’ campaign, according to its EMEA CMO.

Matthew Heath describes himself as a “dyed in the wool ad man”, and notes that his creative agency background has informed his three years at Invesco so far.

The Times Change advert aimed to position the firm as having a strong heritage while adapting to the future. It features artists remaking famous works of art such as the Girl with a Pearl Earring, reimagined with an AirPod earphone rather than an earring.

“We were quite brave,” Matthew says of the Times Change campaign. “For someone of my background that was the sort of thing I was expected to do, be a bit braver.”

The exec was previously Chairman and Chief Strategy Officer at M&C Saatchi London, having worked with Invesco as a client. His observation of asset management “was that despite being incredibly important and influential, it [was] not good at brands and marketing,” which he found “extraordinary.”

“I was nosy enough to think I should get a job and find out what’s going on.”

He argues there has been some change since then, including a better use of science alongside art, technology that supports commercial measurability, and a greater willingness to take risks. There has also been an increase in pace and agility in the sector.

“We’ve moved to an environment where people know [speed, creativity and debate] are important in what was a little bit of a sleepy industry; it’s a pretty vibrant, ever-changing environment.”

He says that taking more risks has been part of his approach, noting that “marketing risk is not equal to investment risk.”

‘Brand distinction between the big firms is very tough’

“Brand level distinction between most of the big firms is very tough. The only brand standouts we see are firms such as Vanguard. They’re very clear what they stand for and that’s not for everyone, but I admire their clarity.”

Beyond that, he says, there are a lot of firms which “talk about things without it being that interesting.”

Matthew calls the positioning being “different but relevant”, arguing that the new positioning shows a bit more of the humanity behind the brand. Previously, the mountain brand market indicated a “cold mountainous world”, with the company’s “interesting, well-intentioned and hard-working people” not coming across at all.

He says the campaign has paid off in figures around brand engagement, particularly in web traffic and lead generation, showing that “the time is ripe for brands with a bit of guts and soul”.

“The whole notion of lead generation and opportunity intelligence, there’s a real commercial value in that that feels provable. If you follow the momentum of that individual client down some sort of pathway to a sale or purchase, we can isolate marketing moments that helped with that.”

“A lot of content is about inspiring and taking clients on that journey,” he says. Marketing’s role in this is to tell stories in a “snappy” way, he says, explaining that advertising is an “art of reduction”.

The discipline of honing messages is important for the investment management industry to consider, he argues, saying that the industry has a tendency to “blather” and be “verbose”.

Matthew cites a meeting with TV physicist Brian Cox at an event as an inspiration, suggesting that marketers in the sector can learn from his approach.

“There was someone whose intellect and knowledge you wouldn’t challenge. The genius is in making it understandable. You don’t think he’s simplistic and a bit dim. You think, my God, he knows all of that stuff and he can explain it to me.”

Investment management is necessarily complicated, Matthew says, “but that doesn’t mean the way we tell the initial story always has to be hyper-complicated and we have to disappear into jargon and acronyms. There’s still a way of expressing what we do that’s simple but not simplistic.”

This is essentially storytelling, Matthew says – although he calls the word itself “unfortunate”.

“It either sounds like making something up or a bit infantile, but it isn’t either of those things. Great storytelling is about articulating in an interesting and engaging way what you are about.”

To develop the Invesco “story”, Matthew went to the core of the business: the investment managers themselves.

“You need to prove you’re copper-bottomed in terms of how you make stock selections, but at a higher level, what makes you come to work, why do you run this fund in this particular way?

“I do think we had slightly lost our mojo on some of that stuff, and we’re definitely back.”

The company did some large scale research around two and a half years ago, which found that a considerable part of the Invesco audience were looking for asset management firms to build more genuine partnerships with. The brand therefore taps into the idea of greater possibilities together – “how can we work together to build a tomorrow industry that’s better than today’s?”

Times Change was designed to change the perceptions of people who “thought they knew” the firm and its capabilities in UK equities.

“We’re proud of our heritage but also our investments in newer technology, new thematics and new capabilities. We need our clients to understand that’s a journey for us, so that idea of juxtaposing what you knew with looking forward is about saying.” 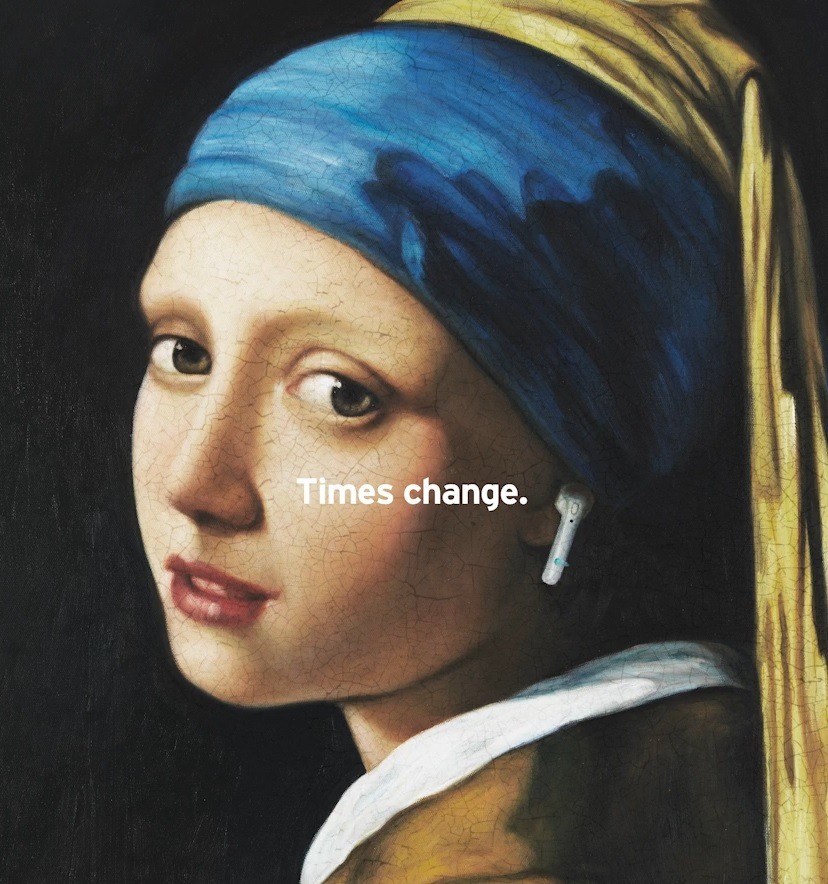 This year may see the ‘Times Change’ platform coming under review in multiple ways, including being adapted more for individual markets. In the UK, the focus on highlighting capabilities people may not be aware of will be dialled up.

“That’s been in place for two and a half years – is that still the creative vehicle that’s right for us? It’s time for us to step back and review that.

“It’s performed extremely well, but we always need to stay one step ahead,” says Matthew, although he notes that “we get bored of things well before our clients do.”

Distinguishing the brand in the marketplace will continue to be a priority.

“It’s always an interesting debate in this sector: what’s the role of brand? But we’re very determined to express and capture what we see as the Invesco difference.”

The industry has been on a path away from product-based marketing, ie taking an individual capability and talking about it, he says.

“It’s not super-efficient, not necessarily client-driven. It’s quite binary – either I want to buy into a particular product or I don’t.”

Invesco has accordingly invested a lot in being able to talk in a more thematic way. It has brought in a team with a more journalistic editorial background to produce content around themes such as ESG and blockchain, with journeys available from this content into product discovery.

Alongside this, there is what Matthew calls “the strong heartbeat of always-on, email programmes, search-based programmes, keyword programmes, all the modern engine room of marketing which is incredibly important to gather client interest from those further down the purchase path.

“If they search for ETF Gold I want Invesco to be there for them.”

He notes that there has been a considerable growth in digital engagement with clients, and finding the right balance between physical events and digital will be crucial, since both offer advantages.

“Digital-first will continue to be the mantra: we’ve built up lots of technology and talent to deliver on that.”

Within the business there has been a move to work more closely with sales teams. Matthew has undertaken “a continuing drive to make sure marketing is commercially accountable and literate.”

The company, like many others, has been on a path of “breaking down siloes”, leading to more collaboration. This incudes in formalised ways, such as Matthew working in a strategic group alongside the CEO.

“[Previously] there wouldn’t have been a marketing voice in the discussion – marketing had been a servant to salespeople.”

The marketing function has pushed into more areas than it’s been before, with marketing entering earlier into discussions to offer the storytelling perspective if for example a thematic product is being developed.

DISRUPTORS Marshmallow VP of Marketing: People see through purpose for the sake of purpose

May 2020: The future of the global investment industry after lock-down